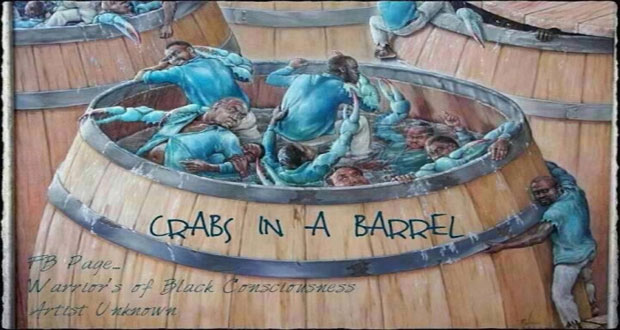 Crabs In A Barrel

Growing up in a small town, I was bused to a neighboring city to attend middle school. Individuals that lived in the larger city did not care for the individuals from my small town, because it was assumed that we came from money and would be conceited.  Many of the students from the city did all in their power to destroy the confidence of those from my small town. In the eighth grade name brands became popular, and so did a thing called the tag test. This is where a person would walk behind someone wearing name brand clothing and pull out their shirt tag to see if the shirt was authentic.

The sad part is no one is exempt from displaying these sorts of crab like behaviors. Your peers can pull you back, your colleagues, friends, even your own mother. You may notice some of the following crabby behaviors from them:

Setting a low standard for you

Making shady comments about your goal

Creating an unspoken competition with you

Bringing up past mistakes you made

Outwardly comparing you to others not on your playing field

When a crab completes any of these or other stifling behaviors, they may dress it up as if they are doing it for your benefit. They may say that they are protecting you or showing you where you could stumble. Protect yourself at all costs from people like this. Those that say what they want but never do anything to achieve their dreams. Don’t be afraid to draw boundaries or even cut them out of your life if need be. Remember that you are so important that you should protect yourself at all costs.

What You Do Speaks Back To You

Your Comfort Zone Will Kill You!