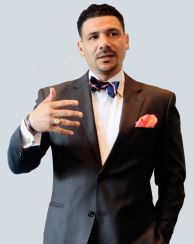 With growth and expansion in mind, Dr. Steve Perry took a moment to share about Capital Preparatory Schools, day time television, and his own experiences with being a black, male Social Worker. To learn more about Dr. Perry and his works, please log on to www.drsteveperry.org.

Ms. Norman: Dr. Perry, while many may know you from your show Save My Son that aired on TV One, they may not know about your history and background. Tell us a little about yourself.

Dr. Perry: Like many of my students, I was born to a teen parent and we lived in public housing until I was a sophomore in college. From that experience, I desired to make an impact on my community. And initially I thought I was going to be a politician, and did that and ran for office when I was like 26, and that was dumb, don’t ever want to do that again. And then from there, recognized that Social Work was really my calling. So, I started working in Social Work, then from Social Work to Education. Because as much as I tried to make an impact on the fringes, I felt like I needed to get in the issues; which was through education. So we started our first school in 2005.

Dr. Perry: What drew me was that I believed that, and I didn’t know much about Social Work professionally, but I had heard about Social Workers; and I wanted to learn more about what was going on in my community from an academic perspective. As an undergrad, I majored in political science and I didn’t feel like that taught me what I wanted to know. So I felt like, in order to learn more about the problem, I needed to learn about it from people who were on the ground. And so that is what drew me to it. I wanted to learn. I didn’t have any barriers entering the profession as a black man. In fact, if I’m being real, I received a full academic scholarship to the University of Pennsylvania.  I am sure one of the reason is because I am black; and male, and wanted to be in Social Work. It has been a great profession for me. I can tell you that I am the only person in the world, only African American male in the world, who graduated from the University of Pennsylvania Social Work School in 1995. No others did. I was the only black person in my entire graduate school class. So apparently there are barriers; and some of them may implicit, and some may be explicit. I was fortunate in that at least one of the explicit barriers were removed, one of them being the cost. That was removed for me, so thanks to the University of Pennsylvania for that.

Ms. Norman: Definitely. Why is the mental health of the black man so important?

Dr. Perry: I think every community is especially important, but the level of trauma that black men face is especially pronounced because it is actually part of the way the country is run. Our schools start beating on black boys upon entry. We are suspended at a higher rate and disciplined at a higher rate than any other population; and always has been since suspension numbers have been taken. We are expelled at a higher rate than any other group and have been since expulsions have been counted. So starting from the time we enter into the public sphere, the public system, we are done dirty. So there’s that. And there’s a real impact there. Then it’s hard to tell if it’s the chicken or the egg. It’s hard to tell if it’s the internalization of these behaviors, or if it’s our own community standards that drive some of these other elements. But, among the black community, it is too often the case that we look down on men who have feelings. Kids talk about being caught up in your feelings like that’s a bad thing. And mental health support is seen as a sign of weakness. So somewhere between that and this really peculiar intersection of homophobia, black men don’t want to look like we are soft. And the challenge is convincing brothers that we need to take care of our entire health. I mean, it’s not like we take great care of ourselves physically by going to the doctor. You know, the physicians; but we definitely don’t take care of ourselves from a mental health perspective. So on any number of levels, even within partnerships, it is not uncommon to expect a man who is a partner to be without emotions. Real talk. And nobody wants to date a guy who is going to cry at a film. There’s not a lot of sisters running around saying, ‘Oh I like that one, you see him crying at Bambi, I love that about him’.

Ms. Norman: (Laughter) Understood, understood. What are some repetitive issues you have come across that plaque the mental health of the black community?

Dr. Perry: Well, you know, we have so many secrets embedded in our experiences. It’s the reason why, the scourge of someone like R Kelly could unfold. Because we have so many secrets. And people, we don’t often value, I don’t know about other groups. I can only speak about the group that I am a part of and have spent my life in. We just do each other dirty in that space. I just think that we could do so much better. I do.

Ms. Norman: I agree. You have completed an extensive amount of work in the fields of Social Work and Education. Can you tell us about the work that you have been doing in the field of education?

Dr. Perry: Well, what I have been doing, the secret behind the work that we have been doing is that we just keep opening mental health facilities that we call schools. In fact, the new school that we are looking to open in the Bronx, we are considering calling it a Trauma Certified School. So we get it, we get that you have to educate the whole child and understand that there’s a lot that goes into that. So our school is designed to meet their exact needs.

Ms. Norman: How many Capital Preparatory Schools are currently in operation?

Ms. Norman: And the Bronx would be the 5th site.

Ms. Norman: What would you say are some of the greater accomplishments of the Capital Preparatory Schools?

Dr. Perry: We sent 100% of our graduates on to 4 year colleges every year since we opened our first school in 2005.

Ms. Norman: Wow, wow that is amazing. Absolutely amazing. Are their plans to further expand your Preparatory Schools in the future?

Ms. Norman: Alright, and do you mind to share anything that you all have in the works with expanding the schools.

Dr. Perry: We are not yet in the position to discuss that. But as soon as I am, you will be among one of the first to know.

Dr. Perry: I don’t know, people asked me opinion, and then they asked me to come to speak to a group of people. It was not something I sought to do. The performance of our schools, some of the other projects that I worked on, had people asking me my opinion and for me to speak to them as a group. Some people want to be public speakers. Like that is a thing for them. I think what they want to be is preachers, but the lifestyle is too difficult to maintain. So they want to what is in between. Lots of them want to be rappers and performers, and again they don’t really have that talent set either. So they take all those things and put them together into the preachy, rapper, entertainer thing; is what they end up doing to become a public speaker. Which is dope, if that is what you do. But I talk about what I know; which is how to run schools, and help kids.

Ms. Norman: It was brought to my attention that you have a new daytime talk show by the name of Breakthrough with Dr. Steve Perry. Can you tell us about the show and its creation?

Dr. Perry: The show is, it was a test run. We will see what happens after that. PBS and Fox came together to create a show that aired for 2 weeks, and now they are in the decision phase. It’s a show where you will see people who are dealing with real problems, get real solutions have their breakthrough.

Ms. Norman: What are some topics or issues that you plan to address on the show?

Dr. Perry: Well we address everything from raising your kids, to getting along with your siblings, to working things out with your adult kids, up to relationship issues. We run the gambit.

Ms. Norman: Wonderful. On what station does Breakthrough with Dr. Steve Perry air? What time can viewers catch the show?

Dr. Perry: It aired already and it aired on Fox.

Ms. Norman: What piece or pieces of wisdom would you like to leave for our readers?

Dr. Perry: To thine own self be true. I believe that you have to be who you are. And also in these very judgmental times, recognize that no one of us are in a position to judge anyone. Everyone is making decisions every single day that if viewed by other people, would not be celebrated. Every does it. Stop judging people. Live your life; let others live theirs.

Ms. Norman: Absolutely. Where can individuals that are interested in your works learn more about them or stay up to date on future developments?

Hide Your Kids. Hide Your Wife. A Social Worker Is At The Door

Are Your Ships Sinking?